Showing posts from 2007
Show all

This is a little blast from my past, about 11 years ago now, when I was at school and a Robin Hood style hacker for attention. You wouldn't have thought I would turn into a right wing troll one day.
1 comment
Read more

Why minimum wage is bad for the little guy 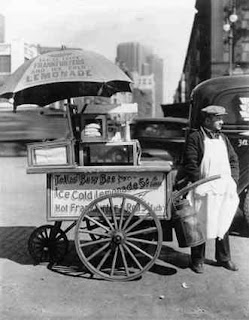 Minimum wage and other worker protection schemes are put in place by politicians with seemingly good intentions. Even if the intentions are good, I don't believe it's good for the economy. Let me try to demonstrate: Imagine you have lost your job and decided to start a hot dog stand . You get a stand and set it up at a busy location and hot dogs sell quite well. Business is going well, but with the money you make you can't send your kids to university, so you want to start a second stand . First you have to save up for a second stand , or more likely you have to convince a bank to lend you money to buy the second stand . Then since you can't clone yourself, you also have to find someone to man the second stand . You now have a loan to pay off for the second stand , so you're a bit low on cash to pay the guy who mans the second stand . You make him a deal, you pay him very little, but for each hot dog he sells, he gets some money. He figures he'll
Post a Comment
Read more

Can we predict future temperatures? 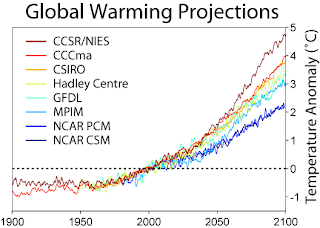 We often see graphs from various places predicting how the world is going to warm up over the next 100 years. Weather prediction is a complex matter since weather is a complex system and a lot of work has been done to make these predictions. A big part of this work includes the use of super computers that simulate entire climate systems and everything affecting it, including the sea, clouds, air and sun. Source: globalwarmingart.com Scientists have a fairly good understanding of the physical mechanisms that contribute to the weather, and fairly accurate models to predict how a particular component of this system will react to specific influences. What makes it extremely complex is how all these work together, down to each molecule around the surface of the earth. Chaos Theory describes that small differences in an initial dynamic system can contribute to serious unpredictability later on. This theory came about during work on weather modeling because this is where the effects of it
Post a Comment
Read more

What I learned from my day of fame on reddit

March 12, 2007
A site of my own that I submitted to Reddit, made the front page. It has made me a Reddit rock star, and I have to share this experience with all my fans and aspiring Reddit rock stars. A few years ago I put up a web site demonstrating the Forer/Barnum effect of subjective validation. Yes, it sounds boring and obscure. I decided to submit it to Reddit to increase the amount of participants for analysis, but to also raise further awareness of subjective validation. Oh, and to become famous. Here is what I have learned from this experience. Will the traffic flood your server? Not really, I'd say, unless perhaps you're hosting it from home on your ADSL connection and have a page full of large images. In my case the average visit took about 60k of data and at the time of writing I've done under 300Mb of outgoing traffic on the site since it was released to the Reddit scene. It was also reasonably spread out, even when it was number 4 on the front page I only got about
1 comment
Read more