How to pretend that you are a useful government 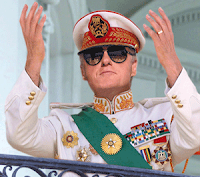 I'm starting to form a set of rules of how to pretend you're a useful government, while effectively not doing much, but also not harming anything that much either.

The first and most important stunt is to look at an industry where competition is unrestricted, then make an accurate prediction as to what the outcome on a component of it would eventually be as a result of competition, and make sure it's a popular matter. Or even better, look at all popular matters and determine which ones would be satisfied by the market eventually. Then introduce laws to tell the market to do what it would have done anyway.

Where this works better is where such things are delayed because it deals with issues between different competitors, where the best outcome would be if they all collaborate to a certain degree, since competitors normally take an awfully long time to come to agreement. Examples of these are: data and voice peer/routing, mobile roaming and inter-bank transfers. These are very good bets and earn lots of political brownie points with the electorate for making this happen quicker than the market would have come around to doing it by itself. It also creates the impression that without your brilliant powers of regulation this would never have happened.

If you're even more lazy and shy of a bit of controversy, implement a law which basically mandates the equilibrium in a market segment which has already been achieved by competition. Introduce this by citing possible dangers of it diverging too far from the equilibrium. For example put a cap on the price of some goods, either a minimum or maximum, or even the price of labour. Throw in some spin about how bad it would be if these things cost so much more or people get paid so much less. In the future this will create the impression that you are responsible for the fact that the current conditions are so because of your doing.

It doesn't matter if any of these laws are totally unnecessary in other countries, as we see with net-neutrality, even the intellectual geeks won't observe what happens in other countries with unrestricted competition and no such legislation. There's always a government protected monopoly somewhere that you can use as an example of the failures of the market. It also doesn't matter if your legislation will put restrictions on the market in the long run. On top of that, the most successful players in that market will actually be enjoying some protection by your legislation because it stifles innovation from small new competitors, so you'll have their wholehearted support.

Just remember to make your adjustments an accurate reflection of current conditions that work, not those that don't work or not at levels which is out of line with current conditions, or else you run the risk of getting the blame for something instead of the credit. You only have to worry about current conditions though. Whether any of your measures will fail in the long run isn't really your problem since you'll be out of office and retired by the time this happens, at least you've left something for future governments to do in order to look useful and to make their mark by making amendments, for example if you have aspirations for your son to get into politics.

For other popular issues that you feel you want to earn more points on, but know they're not entirely economical, fund it by taxing something considered to be undesirable, best place to look is what makes regular headlines in the media. Whether it's drinking alcohol or flying in a jet, just raise taxes on it and you'll have that extra cash to spend on big vehicles and energy consuming machines that are used to recycle plastic or extra police officers to catch people smoking in pubs.
politics

December 30, 2011
In a previous article, Introduction to Veritas Cluster Server , I gave a general overview of the VCS product and how it's put together and what you can do with it.  In this article I'll give a general overview of how you go about configuring it. Before writing this, I have had no dealings with with product before, so hopefully what I cover here will help some lazy folk out there to quickly get an idea of what configuring this product is about.  I'm going to be looking at it from a Solaris perspective, since I believe most of the deployments of this product out in the field is on Solaris, and it's what I may have to support and perhaps you too.  I think it's very similar to the way it's done on Red Hat, so don't fear. Files The configuration files are normally in: /etc/VRTSvcs/conf/config There are two main configuration files: main.cf that defines the entire cluster. types.cf that defines the resource types.  There are more like the above, if mo
Read more